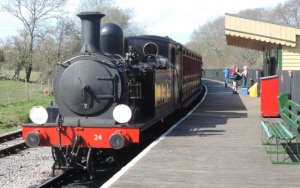 Tonight we are looking at a rather special and unique station on the Isle of Wight Steam Railway in the form of Smallbrook Junction. It is unusual because it has no public access but exists purely to provide a connection between two rail systems in the form a heritage line and the Island Line operated by South West Trains.

The station was opened in 1991 by British Rail when the Isle of Wight Steam Railway was extended to reach the Island Line, in order to provide a passenger interchange between the two. It is only served on days that both the Island Line and the Steam Railway are open, as there is no access either by path or by road. I got chatting to the lady in charge of the station who told me she has to travel up on the first train in the morning to open up the station and when she closes up just before the last train and travels back on the service. If  the Isle of Wight Steam Railway achieves its long term aim of extending to Ryde St. Johns Road, it is likely that Smallbrook Junction station would close.

One thought on “Smallbrook Junction”