Trago Mills is a large “discount retailer” with three stores, two in Cornwall and a third located near Newton Abbott in Devon.  Having never visited the Cornish outposts I can have no opinion as such about them, but a visit to the Devon branch has pretty much been an annual occurrence for me.  It is a great place to find all manner of household and garden items, often for very little money (although unfortunately the model shop has no bargains).  But there are a couple things for the railway enthusiast, the first being a large 00 scale model railway that has already been reported on before (click here to read more,) but the second I’m rather ashamed to say I’ve never ridden on before.  That was until last Sunday…  That’s right folks, I’ve visited this place more times than I care to mention but have not had a ride on it’s steam railway – Bickington Steam Railway.

In my defence, the reason has never been for not wanting a ride; it has more to do with my attitude to shopping.  For me, shopping is something that should wherever possible be done as minimalisticly as possible.  By that I mean, early in and out quickly!  But Sunday was different, my wife and I swanned in to Trago Mills at 11AM (I must be getting softer as I get older!)  So a ride around Bickington Steam Railway at long last beckoned.  Despite the fact that it is nestled in what is a effectively a theme/amusement park, credit has to be given for it being a real steam railway – yes coal, soot and water.  The railway winds past the different amusements in the extensive grounds of the site that includes some lakes and even a dinosaur, making for an unusual ride to say the least!  The line has some impressive infrastructure, the station canopy, 23 pier viaduct and turntable in particular. 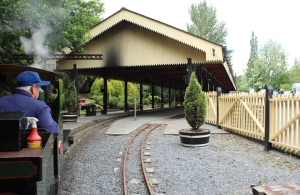 The railway is 10 ¼ inch gauge and so just about big enough for two people to sit next each other.  It’s a nice size allowing for decent steam engines and the inside framed 2-6-0 locomotive “Alice” with outside valve gear that hauled my wife and I was a very attractive locomotive and wore a smart lined green livery.

I’m very happy to have finally ridden on this steam railway.  The 30 minute journey is a varied experience and the steam engines are genuinely worth seeing.  For £2 for an adult, it’s also very good value and a perfect antidote to shopping – if only every shopping centre had a steam railway!