Following the popularity of my first review looking at the Black 5, Bigjigs have kindly sent me another loco to review and its no great surprise that I went for the ranges only Bulleid locomotive – the Bluebell Railway’s 34059 Sir Archibald Sinclair. 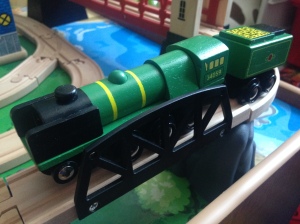 Use: Express Passenger and Express Goods 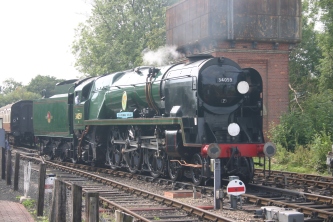 One of the main reasons I chose this locomotive was because of all the locos in BigJigs Heritage range I knew that recreating the Bulleid would be the hardest challenge. The most obvious identifier for most people that a locomotive is a Bulleid design is traditionally the boxpok style wheels which stand out compared to the more traditional solid spoke versions. Sir Archibald Sinclair does not have these style wheels which I can’t hold against BigJigs because the disc style wheels are far safer for children and that rightly is prioritised.  In terms of overall shape I think they’ve done a decent job because the boiler is pretty much spot on, it has the oversized smoke defectors and the cab is roughly the right shape. The only other downsize is the missing set of wheels which should be under the cab, again this is another compromise that had to be taken as not to affect the overall running and play quality. I did experiment with adding a set of wheels onto it myself and I can see why the decision was taken as the added weight did unbalance the locomotive.

In terms of capturing the details of Sir Archibald Sinclair the locomotive does quite well as the nameplate on the running plate is crisp, the livery is well applied, the numbers and windows on the cab stand out. Another feature that the Black 5 has which Sir Archibald does not is details on the smokebox door but with the smoke deflectors on the front you wouldnt really see the detail that well if it was applied. The only real thing which is missing that I expect to see on the locomotive is the crest that should be on the side of the boiler. 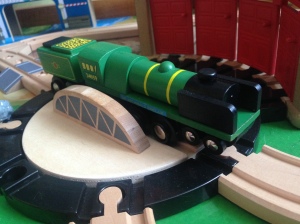 The first part of this review was looking at the model from a railway enthusiast’s view-point and a good percentage of people buying these trains will be granddads or dads (like myself) who are enthusiasts and want something a bit more special than the typical generic wooden trains you usually find on the market. The next part of this review is a bit tricky because as a 27-year-old man I felt I wasn’t the best judge when it came to play quality and its durability. This meant I had to call in not only my 5 and 1-year-old kids but also my 8 and 3-year-old nephews to test the locomotive.

As I did with the Black 5, in order to get a fair overall assessment of the play quality I gave the locomotive to my kids and nephews for a week and then asked what they thought. The children loved playing with the locomotive as they again said it felt “more grown up”, “real” and “fun”. The locomotive has a slightly smaller tender which did make for better play as it was able to take tighter corners than the Black 5 without hitting things. Sir Archibald Sinclair is the biggest train in my kids collection so the children were able to grip the locomotive with their whole hand, so were able to push it around at a fast speed. This isn’t possible with some of the smaller trains as they tend to only use a couple of fingers to hold the locomotive which means it derails easily when it goes fast.

During the testing of Sir Archibald Sinclair my 1-year-old gave a really good go at breaking the train and it amazingly survived being thrown down the stairs and quite a bit of rough play without fault. The locomotive was faultless as it far out performed the other locomotives on the train board and showed no sign of wear and tear. 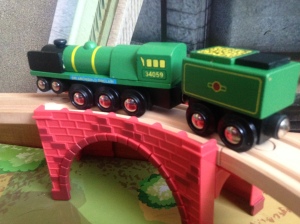 Overall the locomotive performed very well and gave the Black 5 a good run for its money, I do feel the one area it was let down was the missing crest on the side of the boiler. My daughter is the only one of my testers who has seen a rebuilt Bulleid and she did identify it as “daddys train” as I volunteer helping to restore a real Bulleid pacific.

Where to buy one:

Traditionally we don’t mention where to purchase products we review, but with Bigjigs I have made an expectation. This is because orders placed on the Bigjigs Toys website are mostly fulfilled by independent toy shops based on their stock levels and geographical location. By purchasing from the website, you are helping to support your local high street and, more importantly, your local toy shop. I was actually chatting to a shop owner in Winchester who stocks Bigjigs products who told me he gets lots of orders he wouldn’t have got without the Bigjigs website.

After the successful daddy/daughter project with the Black 5 I thought we’d have another project improving Sir Achibald. The biggest problem I had with the train was the missing crest so thought I’d address that first. I printed out some photos of Sir Archibald Sinclairs crest and whilst I was there I printed out some features to turn the train into the Golden Arrow. My little assistant then cut out and stuck the print outs on to the locomotive and in my view improved the look tremendously. She wasnt happy with this and insisted we also painted the bufferbeam red and the cab roof black which I had to agree was the right decision!

Disclosure: The team at Bigjigs rail very kindly supplied me with the Black 5 for the purpose of a review.  This review was written by me and all opinions are my own.