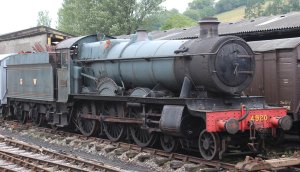 The South Devon Railway is home to 49xx Hall class 4920 Dumbleton Hall.  The locomotive last steamed in 1999 and has since been awaiting funds to be raised in the order of £250,000-£300,000.  The latest reports from the railway media are that donations have reached a level at which it’s overhaul could begin as early as 2016, although this is depending on progress of other locomotives in the queue at Buckfastleigh, with a realistic start being 2018 (when it is  scheduled to begin.)

Dumbleton Hall’s role is likely to be as flagship for the line and so tour other preserved lines, although thanks to upgrades to the South Devon Railway’s Nursery Pool Bridge it will be able to haul services on home metals.

Although there are 10/11 survivors in total (depending on whether you classify 4942 Maindy Hall that is being regressed to a Saint class,) 4920 is the oldest survivor of Collett’s successful Hall class and as such is historically significant.  It is great to hear that progress is being made to bring 4920 back to life.