Yesterday I posted all my better photos from the Mid Hants Gala and I mentioned that at the start of the day I had 2 shots I wanted to get with the first being the Ivatt hauling the freight in the morning which turned out as planned. The second of these shots was at attempt to get a photo of the T9 and the Q class together but being based at Ropley the entire day on the 35011 stand there was only one opportunity for me to get the shot. Looking at the timetable I noticed that the T9 was hauling the shuttle between Alresford and Ropley and once it was done it was going to park up at the sidings under the Harry Potter and soon after the Q class was due past with the freight so I thought this would be my best chance to get them together. Sure enough the timings worked out well and the 2 locomotives where in the right place and the right time. 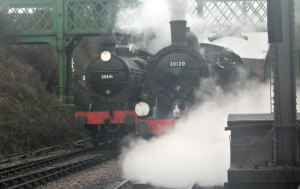 Yep the T9 let out a load of steam and disappeared and by the time the Q was in position; 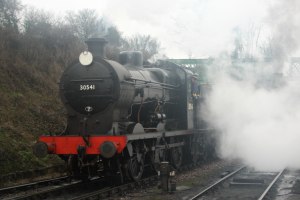 The T9 was gone behind a cloud of steam. Steam locomotives as much as I love they can also drive you up the wall but at least the shot isn’t a total failure as the Q class does look lovely its just a shame its not the shot I was after. With steam locomotive photography you need a bit of luck which sometimes you get and sometimes you don’t and in this case my luck was definitely out.