With the withdrawal of 850 Lord Nelson and 34007 Wadebridge due to the expiration of their ten year boiler certificates, the return to service of BR Standard class 4MT 2-6-0 76017 on the Watercress Line is a high priority.  Happily, progress is being made, with the boiler (having passed its steam test) being mounted onto the frames last week. 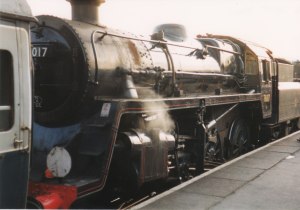 Interestingly, when 76017 was a little over a year old she had an accident.  Whilst hauling a goods train from Banbury to Eastleigh, the driver lost control, resulting in 76017 running through a catch point and down an embankment.  Luckily nobody was hurt by the incident and the locomotive has lived on to pull services in preservation.

76017 hasn’t steamed since the 1990’s and is one of the first locomotives I remember seeing on the Watercress Line, on what was probably my first visit to the preserved railway as a child.  The picture above is one of my earliest pictures of a steam engine and it’s blind luck that it doesn’t feature my thumb or finger blocking the lens!  Naturally I am looking forward to seeing her steaming again, later this year.

76017 will join recently returned to service Ivatt class 2MT 41312 to haul services in 2016, adding to the variety of the railway’s running fleet.  Meanwhile of course, the railway’s flagship steam locomotive is being brought back to life in its birthplace, but we’ll leave the CanPac update for another day!