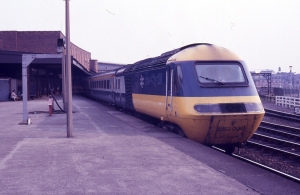 Our railway heritage is so rich that there are often commemorations of significant milestones at different dates.  This year marked a significant commemoration of 40 years of service of perhaps the most celebrated of British Railways trains – the High Speed Train (HST), also known as InterCity 125 or by its less glamorous TOPS classification of class 43. 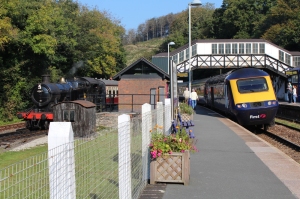 There is perhaps a question of where the heritage world begins and ends.  Although it’s perhaps not considered a “heritage” type, 40 years is nevertheless an impressive time span, especially for a front-line and high prestige class.

Even when side by side with a steam locomotive, the HST has much popular support. When the picture above was published here on locoyard, it was given the title of the “Beast of Bodmin”.  At the time I was referring to the steam locomotive, but someone soon pointed out that the diesel on the right was the real beast.  And they had a point.  In 1987, class 43 power cars 43102 City of Wakefield and 43159 with four Mk 3 carriages reached 148.5mph, braking the world record for diesel traction.  Not only that, the HST on the right represents an important piece of railway history, even though it’s still serving the public. 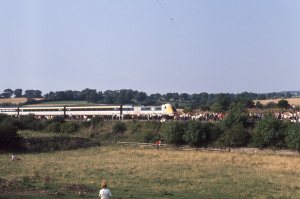 The first HST was built in 1975 and entered service the following year, but the two prototype power cars were built in 1972 – just 5 years after the last steam engines had been withdrawn from British Railways, which puts into perspective the age of the type.  Prototype Power car 41001 was saved by the National Railway Museum and is now looked after and looked after by the 125 group (see www.125group.org.uk for more). 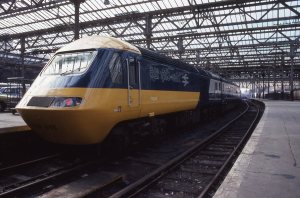 The HST was and has been an excellent performer.  But it manages to perform whilst being very stylish!  Even 40 years on, there’s little to compare in the UK in terms of style, thanks largely to the work of Sir Kenneth Grange.  Modernisation may have heralded a new era of efficiency, but it had also made rail travel (on the whole) a less exciting prospect.  The HST changed that and found its way into the hearts of the public in the same way that steam hauled services did in the past. 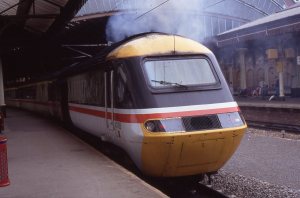 As usual, I make little pretence of knowing much about the technical details of diesel power and so you’ll have to go elsewhere for that! But I can say with some certainty that the InterCity 125 or HST is without doubt one of the most significant developments of rail travel in the UK and the fact that they are still in use (albeit with modifications and updates over the years) is nothing short of remarkable.  And I am not alone in this, around 5,000 people turned up at St Philips Marsh in May to play tribute to 40 years of HST travel.  So, it is only fitting that we mark the occasion here at locoyard – happy fortieth anniversary to the HST!