The London Brighton and South Coast Railway’s A1/A1X terrier is a popular locomotive class for Southern region modellers.  Nicknamed terriers because of their small size; relative power and the locomotive’s terrier like bark; they were to be found in use from 1872 into late BR days.  Their light weight made them indispensible on light branch lines, including the once dense network of railways on the Isle of Wight.  Over the years many modifications were made to terriers, creating many variations within the class.  One of the most notable was the extended bunker fitted on Isle of Wight terriers to increase their range.  The photograph above shows the standard bunkers (from Bluebell Railway’s 55 Stepney and 672 Fenchurch.  The picture below shows the extended Isle of Wight type (from former Kent and East Sussex Railway, now Spa Valley Railway 10 Sutton). 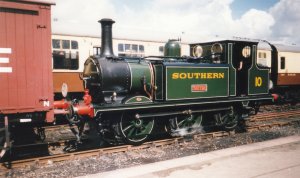 Hornby’s 00 scale model of the terrier has been around for some time and was inherited from the Dapol range.  Although it provides some scope for modifications, it does not allow for this major one and if you want to have this variation, you need to do it yourself!  As my wife is from the Isle of Wight, I felt compelled to have at least one Isle of Wight locomotive in the collection, so it sparked the start of a project… 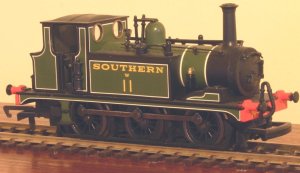 The choice of subject was W11 (Newport), a locomotive now preserved on the Isle of Wight.  The model as supplied by Hornby is shown above.  The southern olive green finish was excellent on this model and in some ways it was a shame to replace it with unlined Southern black.  However, the lack of a real Isle of Wight bunker meant that each time I looked at it I just thought, “it’s not right!”

To carry out the modification I used a Golden Arrow kit.  The kit consists of the bunker and comes with some instructions, however it is important to note that it comes with a flat plastic top.  If you wish to add real coal, I strongly advise you to do this before you fit the new bunker.  I made the mistake of taking it off after fitting, which can be done, but is a lot more fiddly!  The model in post-works condition is shown below, minus its buffer beams.

Adding decals and brass nameplates, the model was soon improved and ready for action. 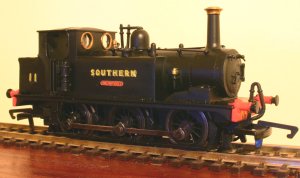 The picture below illustrates the difference the new bunker makes, compared to two other Dapol/Hornby models.

The picture above also shows that I had big problems with the transfers used coming away from the model.  Very soon they became so bad that I had to withdraw the locomotive from service, yet again saying “it doesn’t look right!”  The model is shown below.

So, over the weekend I have been working on the model to replace the transfers and also to carve out the top of the bunker so that I can add real coal.  The next set of pictures illustrate my progress with this. 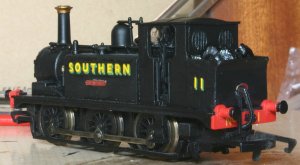 Step 4 – with a tiny amount of watered-down PVA glue, add some coal.

The terrier has now re-joined the fleet and so far the transfers seem to be ok.  Job done!  Well  some lamp irons would good and maybe some weathering but for now it is time to carry on with a different project…

One thought on “Terrier A1X Isle of Wight Bunker Extension”