The next locomotive (after the previous article on U class 1638) to feature on locoyard following last Sunday’s visit to the Bluebell Railway is a unique survivor of the LBSCR’s E4 class.  Purchased straight from British Railways in 1962, B473 is the last remaining member of Billinton’s 0-6-2 radial tank .  Built in 1898 for the London Brighton and South Coast Railway (LBSCR) the class were a useful and relatively powerful locomotive (rated 2MT by British Railways).

The E4 is a regular performer at the Bluebell Railway, and in preservation has run in LBSCR Umber livery (as 473 Birch Grove) and British Railways lined black (32473).  Currently it is painted in Southern Railway’s olive green and was looking fantastic, pulling a rake consisting of one SECR carriage, ex-London Metropolitan stock and an LNWR observation car.  I took a very short video clip of the locomotive steaming into Horsted Keynes; click here to view the video.

The third locomotive operating that day was SECR C class 592.  Unfortunately I did not get too many pictures of this beautiful 0-6-0 at this visit but I shall publish those I did take in the future.  Tomorrow will be a little different – a new chapter in the final part of my journey in becoming a steam enthusiast, looking at some miniature marvels!  Until then, enjoy the photographs! 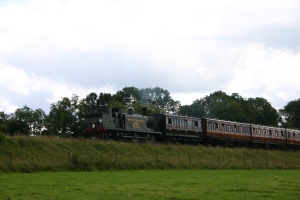