the Bluebell Railway last year.  The first is Dorking Greystone Lime Work’s 3 Captain Baxter.  Built in 1877, this colourful locomotive is a very popular machine.  It’s character partly comes from it’s diminutive  size, which can be seen clearly by comparing it to a 4MT tank as shown in the picture below.

The locomotive was being used to haul a demonstration goods train, with a SR Queen Mary Brake Van at the rear of the train.

The second 0-4-0 tank engine was not running, but could be found in Sheffield Park engine shed.  LSWR 96 Normandy is one of two survivors of the B4 class and was used as a shunter in Southampton docks.

When looking at the B4 class, it easy to wonder why Hornby decided to model the solitary short-lived GWR Holden tank rather than this.

Indeed, Matt Wickham, creator of the Bluebell Model Railway has shown that a model B4 can be made from a Hornby GWR Holden tank, something that I have long considered attempting! 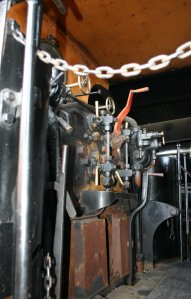 I hope you have enjoyed looking at these two 0-4-0 tank engines.  Do not forget that you still have plenty of time for your Movember competition entries, click here to read more.  I look forward to hearing from you!