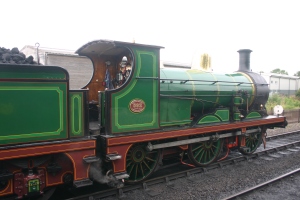 Following yesterdays review of Bachmann’s 00 scale model of Harry Wanwright’s South Eastern and Chatham Railway’s C class, comes a set of previously unpublished set of photographs of the sole survivor, number 592 on the Bluebell Railway in 2009. 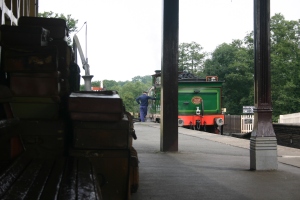 This is the second blog post published on locoyard.com featuring this locomotive.  The previous post gave some detail about the class, but not much about the locomotive itself.

592 was built in 1902 at Longhedge Works and was a member of a 109 strong class designed by CME Harry Wainwright.

It was one of three members of it’s class that escaped withdrawal in BR service at Ashford.  It was purchased by the C-class Preservation Society who kept the locomotive at Ashford until 1970.

It moved to the Bluebell Railway in 1970 and returned to steam in 1975.  It has since had two major overhauls.  It’s survival as a working steam engine is thanks to there being both a spare tender and boiler available. 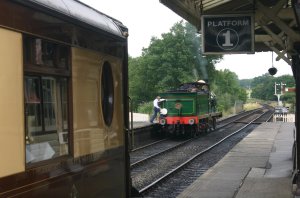 Having run for so long in preservation, the locomotive has become very popular.  Although a humble 0-6-0, it’s beautiful lined SECR green livery makes it stand out from the crowd and as such is often used on special duties, including the Bluebell line’s recreation of the Golden Arrow.  Since the revival of model railways in the early 2000’s, demand steadily grew for a model of the C class to be produced.

Now that the scale model has been produced, I’m sure many more of you will want to see the 592 in steam.  It is well worth seeing and I strongly advise you to do so as it is beautiful well-kept locomotive.