Unfortunately I had little success today and whilst driving along the line I was pulled over by the police who were looking for someone else and wondered where I was going!  It seems a car seemingly randomly stop-starting and pulling into car parks looks quite suspicious to an observer.  When telling the police officer my quest, naturally he chuckled and let me on my way!  I have to point out that he was very polite and understanding.  However it did hamper the search somewhat and Cheltenham arrived at Alton before I did. 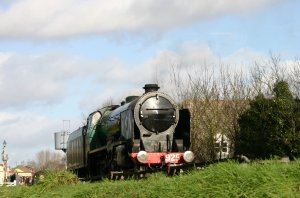 There is a footpath that follows the Watercress line from Alton station – along the car park (west) side.  It is here that I captured Cheltenham running around its train (see above).  It has very high fence with barbed wire that makes taking a good picture very difficult and potentially painful!  I carried on my search a decided on getting a snap of the return train passing over Lower Turk Street.  However, this spot only provided a partial view of the locomotive and extreme contrast between the light on the locomotive and the dark forested foreground/road.  The resulting picture was, unfortunately, not fit for publication.  Lesson learned… find another spot next time! 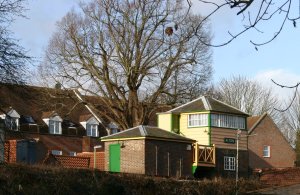 Returning on the opposite side of the line to Alton station next to King’s Pond (a small lake), a few possible locations were to be found, such as the spot above where a good view of the signal box was to be found.  On the subject of boxes, I bumped into my first “Golden” letterbox (see below); painted by Royal Mail in honour of local (Equestrian) Olympian Peter Charles.  Funnily enough, this letter box was incorrectly painted gold – Peter Charles is actually from Bentworth – about four miles away! 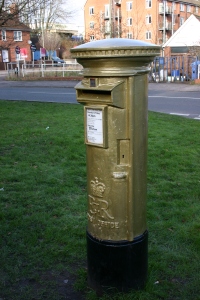 A couple more shots  were taken; firstly (below) of the water tower from Paper Mill Lane (there’s not much scope of taking pictures of trains here. 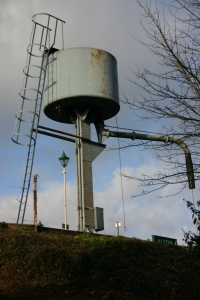 Secondly (below) a decent view of the station can be found from “The Lamports”, although this is a limited vantage point for passing trains. 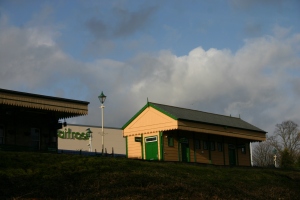 One good potential spot for future photographs was from Ashdell Road (below), where a view of trains can be had.  From here I snapped “Thumper” class 205 DEMU Hampshire Unit 1125 on a test run, with the before-mentioned King’s Pond in the foreground. 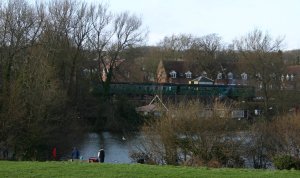 After this, I headed to Ropley – click here to read more.  Thanks for reading folks! 🙂