With the opening of the Bluebell Railway’s northern extension tomorrow, a model of one of the line’s locomotive’s seemed appropriate.  So here we have, unrebuilt West Country Bulleid Pacific 21C123 Blackmoor Vale!

The West Country class were one of Southern Railway’s Chief Mechanical Engineer OVS Bulleid’s idiosyncratic designs.  Built with “air smoothed casing” to facilitate cleaning through mechanical washers, they are often referred to as “spam cans” and they incorporated many unusual features.  They were essentially a lightweight version of the Merchant Navy class, (hence also being referred to as “light pacifics”) and required extensive welding in construction with steel fireboxes.  Note also the Bulleid-Firth-Brown wheels which provide better support for the tyre and do not require balancing as do spoked wheels. 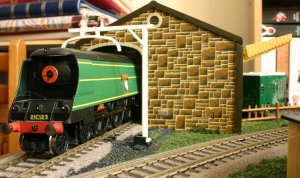 Built in Brighton in 1946, Blackmoor Vale was painted in the distinctive Southern malachite green colours of Locoyard’s model and mounted with the Southern roundel on the smokebox.  It wore this livery until 1950, although it was renumbered 34023 and had Southern markings removed in 1948 when the rail network was nationalised under British Railways.

It was repainted in 1950 into Lined Brunswick Green, a livery it wore for the remainder of its British Railways career.  Unlike many other members of the class, Blackmore Vale was never rebuilt to more conventional lines.

It had a relatively uneventful working life, swapping tenders (as many tender locomotives did in the past) and having some minor modifications to improve visibility through the cab window; the safety valves reduced to two and moved to the rear of the boiler.

Blackmoor Vale was withdrawn in 1967, purchased by the Bulleid society and transferred to the now closed Longmoor Military Railway.  The locomotive moved to the Bluebell Line in 1971 and was returned into service in 1976.  It spent the majority of the next ten years in malachite green, with a brief spell in brunswick green in 1984/5; when it was withdrawn from service.

It had a second period of service from 2000, during which time it was renamed in 2003 for just over month to OVS Bulleid (which is surely a potential limited edition model for Hornby?!) Unfortunately the locomotive had firebox problems and did not remain in service for the full ten years of its boiler certificate, with withdrawal in 2008.

21C123 now awaits its turn for overhaul at Sheffield Park, so unfortunately it will not be in service for the opening of the northern extension tomorrow.  However, hopefully we will see this locomotive in action, running to East Grinstead in the not too distant future.