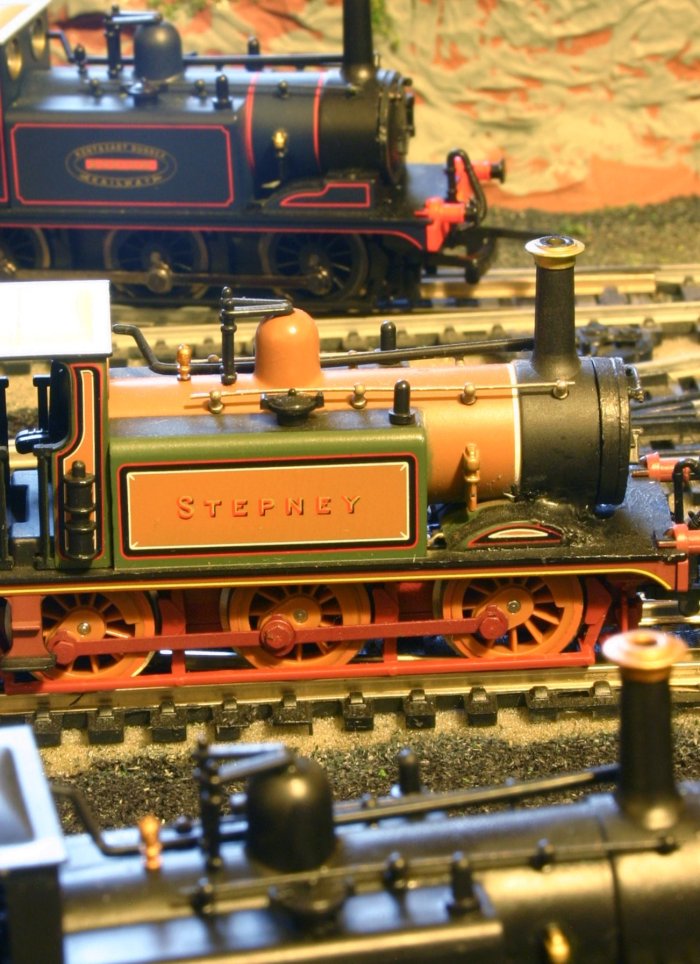 There are currently three examples of this model in working condition in the Locoyard collection, all DCC chipped; one with a minor modification, another more so – with a Golden Arrow bunker extension kit fitted (below).  In fact I’ve also got another two models; one is broken for spares and I’ve owned 2 others in the past.  If the much modified Bachmann Lord Nelson model is the collection’s flagship, the terriers are certainly the signature dish! 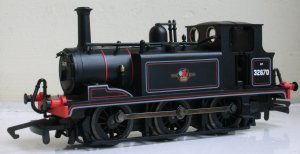 The prototype is a favourite of mine, having grown up near to the Kent & East Sussex Railway; where you could (and still can) hear the distinctive chuff of a terrier.  In fact, it is this distinctive dog-like bark that gave the class its nickname.  Unfortunately the Hornby/ex-Dapol terrier is far from perfect, having been around for a long time.  It was produced first by Dapol before Hornby purchased the model tooling; who have done little modification to the model since then.  With that in mind, here is the full review… 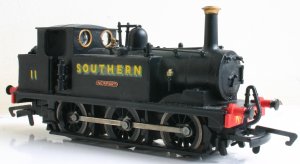 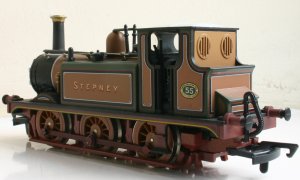 Perhaps the most famous terrier; Stepney rose to fame in the Thomas the Tank Engine series. This is Dapol’s 00 scale version, not the latest Hornby version that has a face (and a poor yellow rendition of the livery) 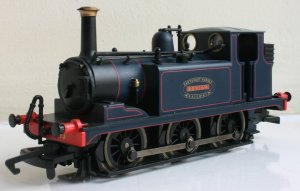 This is an ex-Dapol model and falls a long way short of most other current Ready To Run (RTR) models.  It has no lamp irons or picked out cab details.  The model is a hybrid of the many variations of the class and has modeled sandboxes both above and below the splasher instead of one or the other.  Comes with detailing parts that cover some variations, including a smokebox ring extension. 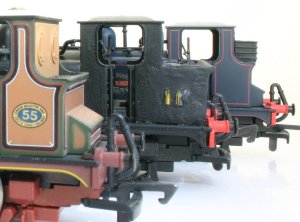 It is recognisable as a terrier and is compact and full of character.   However, without the correct details listed above it could never look 100% correct.  The connecting rods are too big.  Particularly noticeable is the lack of the Isle of Wight extended bunker, that some members were fitted with – including examples that then returned to the mainland.  Golden Arrow produce a kit if you want to fit one yourself (click here for the article) and see picture above for an illustration of the difference it makes.

Without doubt, this is one of the areas that the model really shines through.  Fantastic livery options include LBSCR “improved engine green”, Southern (olive and malachite) green, BR lined, GWR green, LSWR pea green and K&ESR blue.  Look out for incorrect smoke box number plate moulding on the older Dapol non-BR versions (see picture below).  Hornby versions do not have this problem, nor do they suffer from having  shiny connecting rods that some Dapol versions do (see picture above).

Many of you will want to fit the smokebox extension ring, which improves the shape of the model, but spoils the model’s finish.  As with almost every 00 scale model on the market, a moulding seam is visible on the top of the boiler.

As with the prototype, the terriers can go anywhere, 1st radius curves included.  They are realistically low geared and pick-ups are reasonable too.  But they are very noisy and need regular servicing and lubrication, sometimes when new!

A Dapol terrier – note the sandbox on the splasher has been removed, as per preserved prototype

The model is a lightweight, but so it should be!  The prototypes were well-known for their lively performance and the model almost matches it.  Its’ haulage abilities outshine many small tank engine models and it is ok to use as a shunter, although you can expect some wheel spin for anything heavier than two bogie carriages.

This is a case of clutching at straws… it has hand-rails and window glazing, vacuum pipes, cosmetic coupling hooks plus a detailing pack.  There is no DCC provision, ready or fitted.  DCC conversion isn’t too difficult but requires a soldering iron (check out Hornby’s website for a guide).  The terrier has no NEM pockets, although the fitted tension-lock coupling’s aren’t quite as huge as many other Hornby models made with tooling dating of the same era.  The lack of detailing also lets down the model’s specification score.

Retail price is very high for such an old and tired model with such a low specification.  Fortunately second-hand prices can be very reasonable as there are so many examples on sale at any one time.  Partly for this reason, I’ve three versions and a fourth used for spares! 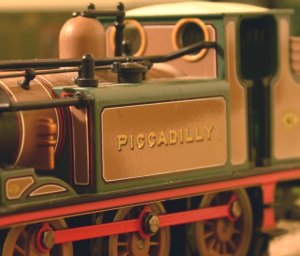 Note the fantastic finish on this Hornby terrier

These models are definitely in need of a complete re-tool.  Many detail variations are not catered for, presumably due to the age of the tooling; and the motor is far too loud and rough-sounding.  However, there’s no denying that although the model is flawed, it is cute with fantastic livery application.  It can be found cheaply secondhand and is an ideal detailing project, as well as being a good candidate for children moving on from more basic models, the terrier being fairly robust.  A 3 star rating is a fair score for Hornby’s A1X terrier. 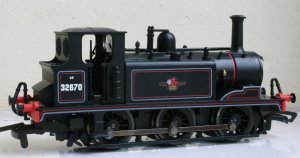