This week’s model star is prestigious member of the Locoyard fleet.  A special member of the BR Standard 7MT Britannia class; 70004 William Shakespeare is a popular prototype despite it no longer being with us.

The British Railways 7MT class was the first official “Standard” class of locomotive built and designed by British Railways.  The class were designed at Derby by Riddles and built at Crewe from 1951 to 1954.  The class took on the name of the doyen of the class – 70000 Britannia.  70004 was one of the first batch of Britannia’s and emerged from Crewe in 1951 and soon after was put on display at the 1951 Festival of Britain on the South Bank.

It transpired that the locomotive’s status after the exhibition as a special steam engine was not to end and it was one of two members of the class selected to be used to haul the Golden Arrow Express service from London Victoria to Dover where passengers connected with a ship that then connected with a direct service in France for Paris.

As with all Standard classes it was partly a product of the 1948 exchange trials but the design had heavy LMS influences – no surprise considering the background of British Railways’ Chief Mechanical Engineer Robert Riddles.  That said, the boiler and trailing wheel were influenced by Bulleid’s weight-saving techniques as developed in the Merchant Navy class.  Interestingly the powerful design only had two (outside) cylinders that had to be the largest possible  to keep within the British loading gauge as usually a locomotive of such power would need three or four cylinders.  The class had some teething problems and 70004 was one of 25 members of the class withdrawn for modification in October 1951, due to it’s driving wheels shifting in it’s axles.  On the whole though the class was highly regarded in all but the western region of British Railways. 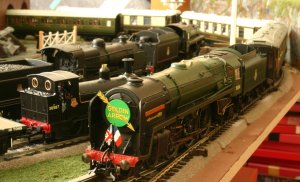 With it’s relatively new Bulleid Pacific’s, the Southern region didn’t require a new express locomotive type and as a result the majority of the 55 strong Britannia class were based elsewhere in the UK, particularly in the Eastern and Western regions.  William Shakespeare was only allocated to Southern metals with classmate 70014 Iron Duke to act as flagship’s for the prestigious Golden Arrow Express.  It turned out that 70004  and Southern classmate 70014 wouldn’t stay in the Southern region for long and were moved to Manchester in 1958, replaced by BR Standard 5MT’s.

70004 was still a relatively young locomotive when it was withdrawn from service in 1967 from Carlisle and unfortunately it was cut-up the following year.  Two other members of the class have survived – 70000 Britannia and the National Collection’s 70013 Oliver Cromwell that are both in working order (as of 2013).

This model is excellent (click here to read the review).  Links to other model of the week articles can be found in the Loco Model Page (click here to see more).  Thanks for reading folks 🙂