The only small locomotive running at the Watercress Line Spring Steam Gala 2014 was also the most colourful and oldest.  Built in 1898 at Neasden Works for the Baker Street to Verney Junction service of the Metropolitan Railway, what is now part of the Metropolitan Line on the London Underground network, this locomotive is a rare steam survivor of London Underground.  This was the first time I had seen “Met Loco No. 1”, as the locomotive is usually based at the Buckinghamshire Railway Centre, Quainton Road Station. 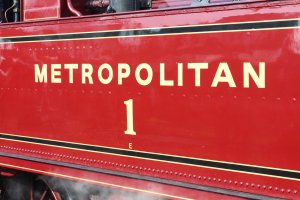 A small class of seven locomotives, the E class were regarded as successful and were the main form of motive power for the Chiltern line for over twenty years until larger locomotives took their place.  They all passed into London Transport stock in 1933, when Met Loco No. 1 became L.44.  By 1935, three classmates were withdrawn and scrapped and another was in 1941.  By the mid 1960’s, the remaining three were withdrawn, two of which were scrapped and Met Loco No. 1 became the soul survivor. 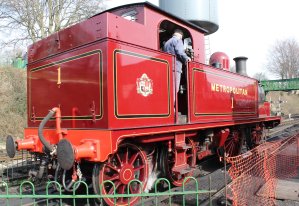 If it wasn’t for the London Railway Preservation Society (LRPS) and a quirk of fate, Met Loco No. 1 would never have been saved.  The LRPS set up a “Met Tank Fund” in 1962, with the original intention being to save an F class 0-6-2T locomotive (L.52).  However, as L.52 had a cracked mainframe, L.44 (Met Loco No. 1) was selected as a second choice instead.  Interestingly, it shares a similar path of survival of another visitor to the Watercress Line’s spring steam gala; 35028 Clan Line (click here for more).

Much more recently, Met Loco No. 1 was the star of the 150th Anniversary of the Metropolitan Line in 2013, where it hauled authentic stock back in it’s old haunts, including Baker Street, Moorgate and Edgware Road.

During the gala, Met Loco No. 1 hauled class 205 DEMU Thumper Unit 1125 in a shuttle between Ropley and Alresford.  As this was the first time I’d seen this engine and loving it’s Victorian outline, with a rich livery to boot, I was rather trigger happy, hence the rather large gallery that follows!  Enjoy! 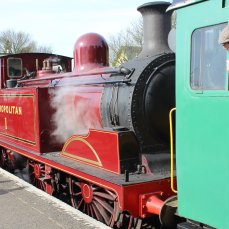