It is strange to think that this locomotive is a classmate of 34007 Wadebridge, featured earlier in the week.  34046 Braunton is one of the rebuilt versions of the West Country class and more closely resembles the third Bulleid pacific to star at the Watercress Line Spring Steam Gala 2014 – 35028 Clan Line.  Rebuilding transformed the fairly radical Bulleid design into something more conventional and it was great to see the two types running alongside each other in the Gala.

Built in Brighton in 1946 (originally numbered 21C146 and without a name), this locomotive would have originally looked a lot like classmate 34007 Wadebridge.  This meant it originally was built with “air smoothed casing” to facilitate cleaning through mechanical washers.  Being essentially a lightweight version of the Merchant Navy class, (hence also being referred to as “light pacifics”) they required extensive welding in construction with steel fireboxes.  Note also the Bulleid-Firth-Brown wheels which provide better support for the tyre, that did not require balancing when in their original form and meant that there was an absence of “hammer blow”.

Originally a Southern Railway locomotive, Braunton passed into British Railway’s ownership in 1948 when the railway network was nationalised.  Renumbered to 34046, the locomotive also gained it’s name in BR service.  As this locomotive worked the first few years of it’s life in the West Country, often passing through the town of Braunton, it was named after it in 1949.

The class in common with Bulleid’s Merchant Navy and identical Battle of Britain classes was in it’s an original form an expensive machine to maintain.  The innovative features proved to be costly and unreliable.  They also consumed more coal, water and oil than they should.  These problems were becoming apparent in 1952 and there were grave concerns of the cost implications of a type that (at the time) were expected to last until 1987.  For that reason, Jarvis worked on re-designing the locomotive’s, effectively “standardising” them.  In 1954, the new designs were ready and rebuilding was approved the following year.  34046 Braunton had it’s rebuild in 1959 which resulted in it looking as it does today. 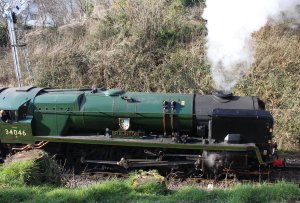 Rebuilding the locomotive’s did fix many of the faults and reliability issues, however it also took away some of the benefits.  They did not perform quite as well, the wheels required balancing and created hammer blow.  They were heavier too – by 4 tons, which barred them working on North Devon and Cornwall routes.  Ironically, after rebuilding, 34046 was no longer able to operate through town after which it was named!  Not all of the class were rebuilt, as the business case for doing so was soon destroyed by the accelerated plans for dieselisation of the British Railways locomotive fleet. 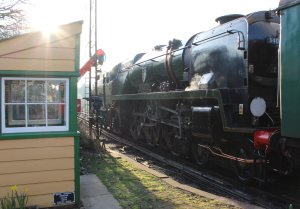 34046 spent its’ last years of service on British Railway’s based at Salisbury and Brighton sheds.  It was withdrawn just six years after its expensive rebuild and was sent away from scrap at the end of 1965.  Luckily it was sent to Dai Woodham’s Scrapyard, Barry, South Wales where (just!) enough of the machine had survived for it to be worth purchasing in 1996.  It was moved to the West Somerset Railway for restoration.  Restoration was a big job, as with the exception of the frames, boiler and wheels (that all needed refurbishment), many parts needed to be sourced from classmates or built from scratch.  It re-entered service in 2008 and has more recently become a mainline star.

If you wish to learn more about this locomotive, check out the owner’s website at www.34046braunton.co.uk.  Thanks for reading folks! 🙂