Having seen this powerful four-cylinder beast so many times, it could be easy to become a little blasé about seeing it again.  Absence makes the heart grow fonder it seems and not having seen 850 Lord Nelson for several months (and not at all this year) it was great to see it again, looking no less impressive alongside three more “modern” machines in the form of Bulleid Pacifics that were also in action over the Watercress Line Spring Steam Gala 2014 weekend.

The Lord Nelson class was the end result of Richard Maunsell’s ambitious challenge to produce a locomotive capable of hauling 500 ton trains at an average speed of 55mph.  Maunsell had a very practical approach to this, by trialling different designs and learning from best practice.  However, the result was a locomotive that had an unrivaled specification for its time. 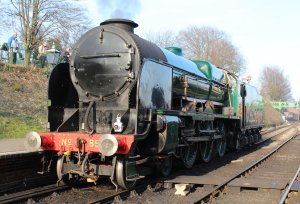 With a boiler pressure of 220lb psi, 6ft 7 in driving wheels, four cylinders and a tractive effort of 33,500lb; the Lord Nelson became the country’s most powerful express locomotive.  It also had the largest fire grate in its day; at 33 square feet in area.  An additional feature were the cranks being set at 135 degrees instead of the usual 90 degrees.  This leads to the four cylinders being used twice for each wheel revolution, rather than once.  As a result; when you see 850 Lord Nelson running, compare the speed with the chuffing sound and you will notice it chuffs twice as fast as you would expect!

The Belpaire firebox gives the class a more “chunky” look than if you compare it to the more elegant looking N15 class.  The large fire grate needs a skilled fireman to get the most out of it, particularly because it differed from other Southern designs by having a split grate, something much more common in GWR locomotives.

Maunsell managed to create a locomotive just 1 ton heavier than the N15 King Arthur class but with 33% more power.  Despite this, it wasn’t universally loved at first, partly due to it being difficult to get the best out of it.  It wasn’t as free-steaming as the N15 King Arthur’s.  It was also introduced as the economy was heading towards the 1933 Depression; so the 500 ton trains never materialised and the N15’s remained as useful as ever and were more popular with crews.  Sixteen locomotives of the class were built and 850 Lord Nelson was the first and it emerged from Eastleigh works in 1926.  After two years of testing the remaining members of the class were built; all named after British Admiral’s.

Although reliable and highly regarded; the Lord Nelson’s did not live up to their potential until Oliver Bulleid made three major modifications.  He improved the tender; increasing the angle of the slope so that coal fell forward more readily, but more significantly he added his Lemaître multiple jet blastpipes and larger diameter piston valves.  Bulleid’s modification’s to other Maunsell designs had mixed results, but made a huge improvement to the Lord Nelson class.

Upon the arrival of Bulleid’s Pacific’s the class were mainly relegated from top-link duties, but they proved themselves very capable of filling-in for failed Bulleid locomotives, something that happened fairly often!  Indeed, thanks to the unreliability of Bulleid’s spam cans; the ever reliable Lord Nelson class remained useful for the Southern and British Railways; until BR sorted out the reliability of Bulleid Pacific’s by extensive rebuilding. 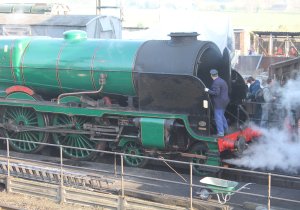 After withdrawal in 1962; 850 Lord Nelson was earmarked for preservation, largely thanks to it being a significant design in the evolution of British express locomotives.  850 Lord Nelson was the first member of its class and now is the last survivor and a member of the National Collection.  In preservation; 850 Lord Nelson had developed a good reputation on the mainline and was based for some time at Carnforth.  It is now a regular performer on the Watercress Line – please see the Steam Diary for lot’s more articles of it in action!

Thanks for reading folks! 🙂