This post is due to be published on the 6th June ,which is the 70th anniversary of the D-Day landings in France. I thought it was important that we marked this historic day with a quick message to say thank you and to celebrate the bravery, honor and sacrifice of those who fought for freedom on the beaches of Normandy.  We will never forget them.

The star of this years spring gala was the newly restored A1X (Terrier) class W11 ‘Newport”. She was withdrawn from service in 2002 and she finally her made her long awaited return this month.

Running around at Smallbrook

She was hauling my first train of the day and she proved to be a powerful and smooth little runner. Unsurprisingly she was very popular and I had to stand in the guards van on my trip to Ashey as the rest of the train was packed full.

Newport was built at the famous Brighton Works in 1878 and was originally No. 40 Brighton. In the same year Newport was chosen to take part in the Paris Exhibition of 1878. She made many trial runs in the Paris area in order to demonstrate the effectiveness of her Westinghouse air brake system. Her performance earned her a gold medal, followed by over 2 decades of hard suburban services based at Battersea. 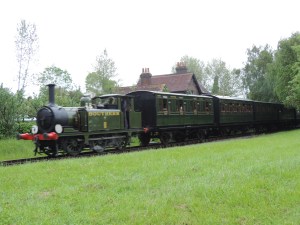 In 1901 Newport was declared surplus to requirements by the LBSCR and was purchased by the Isle of Wight Central Railway. As part of the deal she was overhauled at Brighton Works, repainted in IWCR livery and given the number 11. She was transferred to the Island on 8 January 1902, arriving at Medham, near Cowes. Passing into the ownership of the Southern Railway in 1923 she was renumbered as W11 and in 1930 was given the name ‘Newport’.

In April 1946 she was taken out of use and stored, being shipped back to the mainland on 22 February 1947, for overhaul at Eastleigh Works.  Newport’s ownership changed again in 1948 to British Railways and she continued to be active along the South Coast working the Hayling Island branch (I have done a post on this line click here to view it), the Kent and East Sussex Railway and spells at Brighton, St Leonard’s and Newhaven. Final withdrawal from service came on 27 September 1963, following which she was purchased by Sir Billy Butlin for display at one of his holiday camps. She was on display Pwllheli Holiday Camp for several years  in her years in her LBSC livery following a cosmetic restoration.

She arrived at the Havenstreet in 1975 and was repainted into her Isle of Wight Central Railway No 11 guise and she remained on static display until her purchase from Butlins was completed in July 1976, when the long task of restoring her to full working order was started. Work was painfully slow, proceeding as fast as manpower, finance and workshop facilities would permit. Return to service was finally achieved in 1989 and she proved to be a powerful, economical locomotive more than capable of hauling heavily loaded trains on the steeply graded IW Steam Railway. Following periods in British Railways livery as 32640 and Southern Railway black livery as W11 ‘Newport’ she was withdrawn from service for overhaul on 24th August 2002.

One thought on “Isle of Wight Spring Gala – 11 Newport”