Ashey is the Isle of Wight’s forgotten station with it being a request only stop most people don’t notice it as the train speeds past.  Ashey station was originally built on the Ryde to Newport line to serve the small village of Ashey. 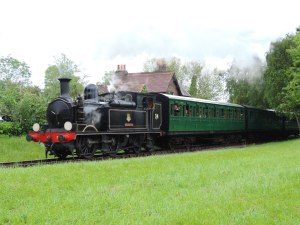 Calbourne leaving Ashey with the old station house in the background.

Despite the small size of the village of Ashey, its’ station was surprisingly grand for its needs. When the Ryde and Newport Railway opened the only passing loop was at Ashey, so it was an important part of the line which could explain the grandness of the station. The lovely Victorian station house and remains of the original platform can be seen to the right of the line. This platform was abandoned by British Railways due to excessive subsidence. Its replacement, a basic brick-built shelter, was constructed on former ground on the opposite side of the line. This is the platform used by Isle of Wight Steam Railway trains today.

Trains call by request at Ashey Station, its rural location making it an ideal location for a stroll in the country or a family picnic and it offers excellent opportunities to photograph the passing trains which was the reason I was there. As the train pulls away from the station the fields that can be seen to the left were once the location of Ashey Racecourse. The horse racing tradition is continued to this day with the staging of the Ashey Scurry and Isle of Wight Grand National each March. A special train service is provided by the Steam Railway on what is this normally peaceful rural station’s busiest day of the year. I was at the station for 2 hours and the only people I saw was the family living in the old station house going for a walk and a railway volunteer using the station as a car park.  I have uploaded a few more photos including one of the original station buiding, level crossing, and Calbourne approaching the station from Havenstreet.

It is a lovely old station and I did get some great photos there, the only problem I had was the bird who could mimic the sound of a train whistle which did cause some confusion. I do hope one day that the railway gains ownership of the old station building as they are unable to expand the length of track. But expanding Ashey would be a worthwhile task and reinstating the passing loop would allow them to run a more complex timetable.