35006 posing with the Atlantic Coast Express headboard at the GWSR Back to Black Gala 2014. Courtsey of GWSR Alex

Today marks the fifty anniversary of the last ever “Atlantic Coast Express” when 34023 Blackmoor Vale left Padstow heading for London Waterloo on the 5th September 1964. One of the most famous named trains in British Railways that had for so long linked London with the holiday locations on the North Cornwall’s Atlantic Coast had ceased to exist.

Earlier this year Roger Aves shared his experiences of taking the Atlantic Coast Express during his childhood and it perfectly captures the excitement and wonder the famous train journey.

A nostalgic boyhood account as seen through intelligent young eyes of traveling on the The Atlantic Coast Express (also well known as the ACE) for his family summer holidays to Devon in the early 1960’s.

Yes, it is quite an old-fashioned read but the evocative style of the period is unveiled as soon as the journey starts…please enjoy!

We begin our journey at London Waterloo Station on one long hot summer’s day in the early 1960’s. The time is 10.30 am and we are all gathered under the big station clock on the huge concourse.

”Come on you lot! – buck up or we’ll miss the train!” I shouted over to my older cousins who were all disappearing off to buy comics and sweets at the W.H.Smith’s bookstall shortly before joining our annual summer holiday train journey to Devon. Luggage was piled everywhere and porters hurried to and fro like uniformed ants pushing big wooden barrows around laden high with trunks and suitcases.

The rest of this brilliant story can be found here. 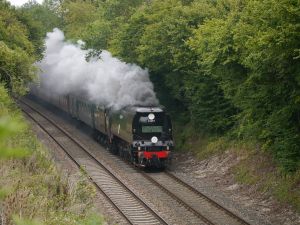 To mark this anniversary Steam Dreams have attempted to recreate the ACE but with many of the lines in north Devon and Cornwall closing as a result of the Beaching Axe the train can’t retrace the full route. Prototypically in the days of steam the train was hauled from Waterloo by a Merchant Navy but with none of those being available 34067 Tangmere will retrace the trip to Exeter, while the 5029 Nunney Castle & 34046 Braunton will share the Cornish leg of the journey. The four day visit to the region will include many of the branch lines still running, including, on Sunday, both the Falmouth and Newquay lines. On 8 September, the ACE will retrace its steps from Penzance to Exeter, before finally heading back to London Waterloo. My own experiences of being a passenger on a Steam Dreams railtour makes me jealous of the people who are lucky enough to be on the ACE today as it will be amazing 4 days for them.

4 thoughts on “The Atlantic Coast Express – 50 years on”