Yesterday rebuilt Bulleid Light Pacific locomotive no 34046 Braunton hauled the Solent and Sacrum railtour out of London Waterloo heading for Salisbury, on the return trip she travelled down the south coast to Fareham before thundering up the Portsmouth direct to London Waterloo. Itis quite rare that a steam service is allowed up this key line due to the amount of trains and lack of places to arrange overtakes. 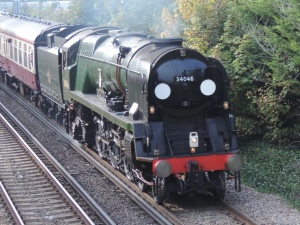 I caught Braunton outside Cosham where she put on a stunnning performance, travelling close to 50mph she thundered through the station as she made up 7 minutes in less than 30 miles on busy communter lines. It was the first time I have seen Braunton on the mainlne since she returned in August 2013 and I was impressed, I have seen Tangmere at this spot before but she was slowing for a signal so did not make as an impressive sight as her rebuilt sister in full flight. I have seen Braunton before at the Watercress Line’s Spring Gala which was covered by Dave and can be found here. James of JS Rail Video captured Branton at Liphook and Woking and her 3 cylindar sound track is amazing, I hope you enjoy it.

If you wish to learn more about this locomotive, check out the owner’s website at www.34046braunton.co.uk