The First World War officially ended on the eleventh hour on the eleventh day of the eleventh month, 1918 – Armistice Day. The act of a Two Minute Silence began on the anniversary of Armistice Day in 1919 by those who did not want to forget the millions killed, injured and affected. Now generally called Remembrance Day, millions of people stop what they are doing and observe a Two Minute Silence at 11am on 11 November each year in the memory of those who have been affected in all conflicts.

This year Remembrance Sunday is rather signficant as the 4th August 2014 marked the 100th anniversary of the day Britain entered one of the costliest conflicts in history – the First World War – with fighting continuing until the 11th of November 1918, Armistice Day.

It is said that the the First World War was the first truly industrialised war with the Railways being the real force multiplier. The steam locomotive was the most affective way of moving troops at the time with internal combustion engine not being developed or reliable enough to transport large amounts of troops quickly. The German state quickly developed a complex system of railways that speed their armies against the British and French on the western front and to fight Russians in the east. The French and British took much longer to perfect their rail networks nearer the front, and the immediate importance of the british railway companies was in ferrying troops around country – principally to the embarkation ports for France, and also to the training camps in places like Salisbury Plain. 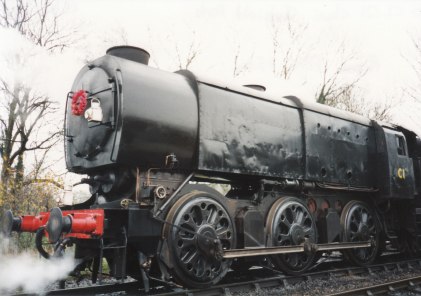 The major railway engineering work across the country such as Swindon turned into giant munitions factories building artillery pieces for the Army. The Royal Navy was also heavily reliant on the railway as the need to transport coal from the North and Welsh mining areas to coastal naval bases of the Royal Navy, was crucial, as the fleet was still overwhelmingly coal powered. Railway company’s ferries were also pressed into service as troop transports and even converted into some of the worlds first aircraft carriers.

As the western front stagnated into static warfare, so infrastructure grew up to service the men and material flowing towards the trenches. An important component of this was the rail network which now took troops right up to the front line using several small narrow gauge railways. The need for locomotives, wagons and carriages meant that several railway companies sent large amount of rolling stock across the channel to help out with some of these class being completely new designs (such as the GWR 43xx class, 5322 below started it’s career in 1917 in France as part of the war effort) to transport aircraft and tanks.

As with most large companies the many railways employees joined the forces. Some of these were on an individual basis, but also the railway companies contributed men and officers to several Royal Engineers Railway Companies, and also some volunteer infantry units. This was very much in keeping with the ‘Pals’ ethos; that men who worked together and joined up together would be allowed to fight together. The absence of young men to work the railways led to the employment of women in many roles, and also not a few retired railway employees.

The National Railway Museum has published several blog posts about the railways during the First World War which can be found below;

In total 37 million died during the First World War including 20,000 railway employees. We will never forget them!

Thanks for reading, I will leave the last words on this post to Laurence Binyon and his poem ‘For the Fallen’

They shall grow not old, as we that are left grow old:
Age shall not weary them, nor the years condemn.
At the going down of the sun and in the morning
We will remember them.