Several days ago we looked at the forthcoming 00 scale Adams 0415 class radial tank models.  The type has been receiving a lot of interest, so much so that two manufacturers are to produce a model, with a further two having considered to also create their own version.  Therefore, it is a good opportunity to learn a little more about the class to see how many excuses modellers might find to purchase one!

Before we look at the details, I think it needs to be said that this locomotive is very elegant and quite unlike the majority of steam engines that have survived to the present day or produced in miniature.  I think I should also add that I am looking forward to owning a model, despite the fact that it’ll be unlikely that I’ll find an excuse to run one.  Look up the type in David St John Thomas and Patrick Whitehouse’s “SR 150 – A Century and a Half of The Southern Railway 2003” and you’ll find one photograph with a short piece of text.  The type is not the most important in the history of railways or even (as it turns out) important in respect to Southern Railway.  As we’ll find out, the class may not be remarkable in a historical context, but were remarkable survivor’s and given that they only fulfilled their primary role for a short space of time.  In many senses the class found their true-calling elsewhere, although by that stage most had been scrapped… 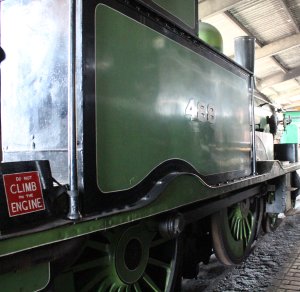 William Adams was Chief Mechanical Engineer (CME) of the London and South Western Railway (LSWR) from 1873 to 1895.  The LSWR has a complex history that would need several dedicated articles to cover effectively, however we’ll summarise a few points here.  Firstly, it was one of the first railways in the country to develop suburban routes and so was key to starting the change where people live in relation to where they work.  Although it’s initial London terminus was at Nine Elms, the railway eventually built Waterloo station and the importance of Waterloo and the scale of the LSWR is demonstrated by the station presently being the busiest railway station in the UK.   The scale of it’s success is incredible and required development of suitable machinery to do the job.  Secondly, the former terminus of Nine Elms was restrictive both as a terminus but also as a base for carriage and locomotive manufacture and the LSWR used outside contractors for many years.  Thirdly, the LSWR was a fierce competitor of the Great Western Railway (GWR) and built routes into the West Country to compete.  Fourth, although the LSWR was relatively slow to electrify suburban routes, (starting in 1912,) they used a successful third rail system that would eventually be adopted when absorbed into Southern Railway at the grouping in 1923, leaving no need for steam motive power.

This is the context of the Adams radial tank’s story, indeed it’s rationale was based on a need for a powerful steam engine to haul suburban commuters in the late nineteenth century.  As noted previously, the railway had little capacity to build locomotives and for this reason outside contractors built the fleet, starting with four in 1882 by Beyer, Peacock & Co.  Eventually the class numbered 71 in total from various contractors, including 12 converted from the 46 class. 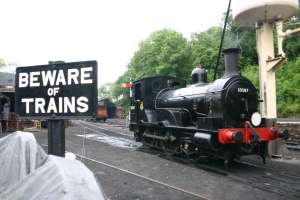 The term “radial” comes from the locomotive using a radial axle; an axle designed to move laterally along the arc of a circle.  The Adams radial tank was well liked by its crews and proved more more suitable than the Beattie Well Tank (above) that they displaced.  Interestingly their life would parallel the class that they replaced.  However it did not last long in service in the London suburbs due to the rapid increases of demands and the class were displaced; starting with the introduction of the T1 class and finally (and more completely) by Drummond’s M7 class (below.)  Even the excellent M7 class wouldn’t last long once electrification took hold.  However, the M7 was a very successful type and soon found homes on secondary routes once displaced from London suburbs, in preference of the older Adams radial 0415 and T1 class tanks.  Indeed it is quite surprising that any Adams radial tanks survived at all.

Withdrawals of Adams radial tanks were taking place even during the first world war (when demand for railway motive power peaked,) although on the whole their lives were slightly longer as a result of wartime demands, especially 488 that was purchased by the Ministry of Munitions.  In 1918 four examples were sent to serve in Glasgow to assist the depleted Highland Railway.  Only 30 of the original 71 lived to become Southern Railway machines in the grouping of 1923 (when LSWR became part of the Southern Railway, one of the “big four.”)  All but three were withdrawn by 1930, including 488 that was sold to Colonel Stephens East Kent Railway in 1919.  The other two survivors were 0125/3125 and 0520/1520.

If it wasn’t for the LSWR’s ambitions to compete in the west of England against the GWR, it is likely that the class would have completely disappeared along with many other types built in pre-grouping times.  One of the LSWR’s west country routes was a branch line to Lyme Regis, which was engineered with very tight curves.  The video above used by kind permission of Huntley Archives (a fantastic resource, please check out www.huntleyarchives.com for more) really illustrates the nature of the line that was eventually closed.  Despite experiments with LBSCR A1X Terrier and LSWR 02 class designs, the Adams Radial Tank was the only type capable of negotiating the route.  For this reason, Southern Railway kept two radials to haul services and eventually purchased the third survivor (488) from the East Kent light railway.  This was because Southern Railway were desperate for an example in better condition in the 1940’s and found 488 in a non-working but reasonable state for full overhaul.  In 1948 the railway network was nationalised and British Railways formed.  The three Adams Radial Tanks were then re-numbered 30582-4.

By 1961, British Railways did what neither the LSWR or Southern Railway had managed to do and found a replacement for the Adams tank.  With some minor track modification’s, Ivatt 2MT tank engines were drafted in to replace the very elderly radials.  Fortunately, the newly formed Bluebell Railway stepped in and purchased 488.  This locomotive has run since on the preserved Sussex line, but is currently non-operational, requiring a full overhaul.  Despite the small scope of operations the Adam’s 0415 class is clearly very popular and it will soon be available as a model in 00 scale, courtesy of both Oxford Models and Hornby.  Who’d have thought a fairly average suburban machine of last Victorian times would attract so much attention? 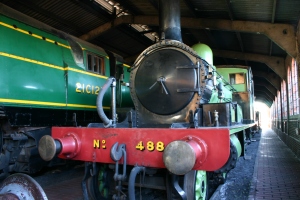 For modellers, there are some excuses to use of these forthcoming ready to run models.  The perfect scenarios would be a late nineteenth century LSWR Suburban layout (although care would have to be taken to back-date models,) or a model of the Lyme Regis branch line or the preserved Bluebell Railway.  There is also scope for use elsewhere; with some limited usage of the class taking place during the 1920’s on Southern secondary routes and consistent usage from the Lyme Regis branch line’s home shed of Exmouth Junction with occasional visits at Eastleigh for major works.  488 had occasional use on coal trains on the East Kent Light Railway, (although they rarely needed a machine of this size.)  Finally there could be potential for an unusual Glasgow in 1918 scene and lets not forget that they were used for rail tours in British Railways times too.

One of the best sources I have found online for pictures and text of Adams Radial Tanks is at //locodriver.co.uk/Railway_Encyclopedia/Part255/Part36/Part01/index.

I’m sure many of you will be able to apply some “modellers license” to find a scenario or an excuse of your own!  The type has little scope for being “needed,” but in reality how much do we really “need” a model railway?  The type has an interesting history, if of a rather limited scope, but it is a beautiful machine with lots of fans.  Let’s hope the models do well!  Who knows what then might follow…