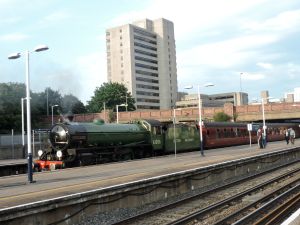 So far this year photographing mainline steam in my local area has been a complete wash out for me with 3 cancelled tours and being at the Mid Hants Spring Gala being the fourth. Until recently the B1s rarely venture onto Southern rails so the ex-LNER Mayflower became my top target and  yesterday I was finally able to get her after months of trying. The train was hauled into Southampton under the power of the class 37 and left in the opposite direction under Mayflower’s own power. She did look glorious in the Apple Green British Railways livery and for me it looks even better on her than it did on Tornado.

In order to cater for all tastes here is the class 37 hauling the train into Southampton. 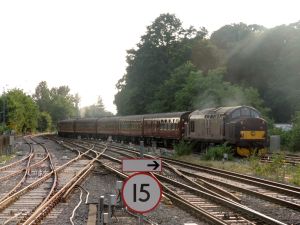 Mayflower is scheduled to run several tours over the summer on the South Coast and with this being a rare locomotive that I have seen which Dave hasnt, so its a safe bet he will be trying to get her as well over the coming months.

One thought on “A Mayflower in Southampton”