One of the delights of the modern heritage railway is it’s ability to surprise you when you find something unusual.  So it was just over a week ago when I met Susan for the first time on the South Devon Railway.  Susan at first glance might look like a diesel shunter, but she is a steam locomotive!  Susan is an 0-4-0 Sentinel Locomotive and very different to the average steam engine.  No. 9537 Susan has a vertical boiler and the wheels are connected by a chain drive between the crankshaft and axles. 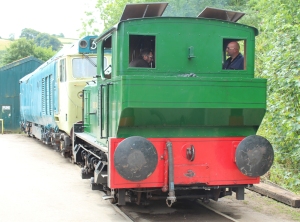 Susan used to have a brother named Timothy when she worked from new in 1952 at Chesterfield Tube Co. Ltd.  Funnily enough, the names of the pair came from the works marketing director’s children!  Timothy was part exchanged for a diesel in 1967 but Susan was sold for preservation to be exhibited in the ultimately ill-fated Lytham Motive Power Museum.  She moved to the Buckinghamshire Railway Centre, Quainton Road in 1986 where she was re-tubed and retuned to working order, with the restoration being completed in 1993.  Purchased by John Buxton, Susan has since moved to the South Devon Railway for her 10 year overhaul, after which she will be moved to Barry Tourist Railway.

I think you’ll agree that Susan is full of character!  She demonstrates that Industrial steam locomotives are often very interesting machines, both in terms of their construction and in anecdotal history.  I was very pleased to meet Susan and hope to see her again some day, hopefully in operation. 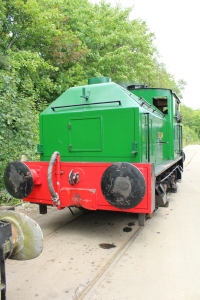