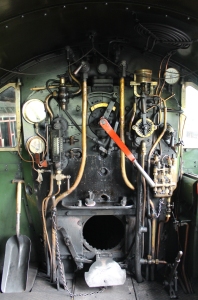 I’m a big fan of 0-6-0 six-coupled type steam locomotives.  They were simple, rugged and historically significant (especially in the UK) as they were one of the most important and numerous types to be constructed.  The South Devon Railway is home to the newest surviving 0-6-0 steam locomotive – the only surviving 2251 Collett Goods class locomotive.  3205 is no stranger to this blog and it has featured before looking at how it was saved by David Rouse (click here to read) and it’s historical context (click here for more.)  Unlike those two visits, 3205 was not in steam when I rode on the line a little over a week ago, but this time I was given the opportunity to get a fresh perspective. 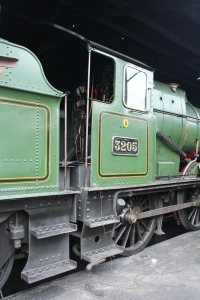 My visit to the South Devon Railway was excellent timing as the wheels for 35005 Canadian Pacific had arrived at Buckfastleigh (the headquarters of the South Devon Railway) for re-profiling.  This gave the excellent opportunity/excuse to introduce myself to the staff and have a look behind the scenes.  The staff and volunteers were very friendly and I very much appreciate the time they gave to have a chat about what they were doing – so a big thank you goes out to them.  If you’re interested in finding out more about some of the impressive work, expertise and machinery to be found at Buckfastleigh, please read the blog post written for the Watercress Line by clicking here. 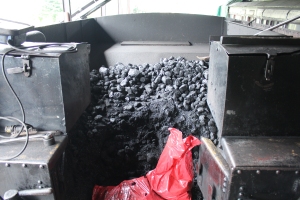 Whilst having a look through the works, I was allowed to have a look on the footplate of 3205.  The cab is very big – indeed I was told that it is the biggest GWR cab, probably due to the firebox not protruding far into the working space.  It also struck me as being very open to the elements, something it has in common with many GWR designs.  It also shares other western traits that make them so popular being reliable, well proportioned, good runners and by all accounts well-liked steam locomotive on the South Devon Railway. 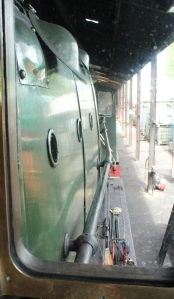 Bachmann have long produced a 00 scale model of this type (click here to read its review) and Peco in N.  As the Collett Goods class has an open cab the lack of picked out colours is noticeable on the models, so hopefully these pictures will help anyone wishing to do it themselves. 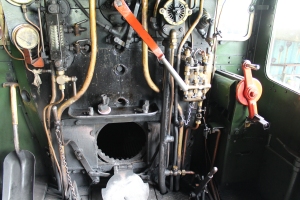