The real Hogwarts Express is currently at the Warner Brothers Studios in London for the Studios Tour. While the locomotive is currently not operational, there is another way to travel behind the train that took Harry Potter to Hogwarts School of Witchcraft and Wizardry… 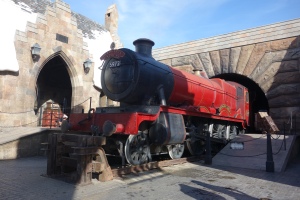 At the Wizarding World of Harry Potter, at the Universal Studios Orlando resort you can see the locomotive at the entrance to Hogsmeade Village, at Islands of Adventure, bellowing smoke from its’ chimney, and the conductor telling stories of the famous train. 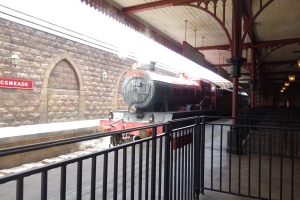 However, at the brand new Diagon Alley, located at the original theme park, Universal Studios Orlando, you can now travel between the two locations, just like Harry Potter and all of the students who studied at Hogwarts. Just like in the books, the train is boarded at London Kings Cross, which has been faithfully recreated, even travelling to the wizarding world through brickwork, using a series of mirrors and sound affects to make it seem real.

The locomotive is not actually steam powered. If it a highly detailed monorail, and there are actually two trains. They are both operated by wires and pulleys, and there is a double track in the middle of the line, where both of the trains can pass. Both trains of the attraction are moving at the same time, as it is a mode of transport between the two theme parks. However, the smoke coming from the funnel, the sound of the pistons and whistle, along with the detail of the locomotive, fools many guests into believing that the train they see pull into the station is the real one from the movies. Steam even vents from the pipes from the carriages and from the pistons when in the station. 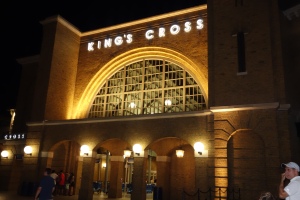 On the train, the British countryside rolls by as you are looking at slightly angled television screens, making it look 3D, and you see characters from the films flying past. There are two films shown, one travelling from Diagon Alley to Hogsmeade, and one travelling in the opposite direction. There are other films that have been made, but not yet been used in the attraction.

The detail at the London side is fantastic, from the faux Underground station, which is so good that I felt like I was in London, and not Orlando. I felt like if the gate wasn’t across, I could travel on the Underground around the city. With the picture above being taken at night, it looks like the station has just closed for the night. 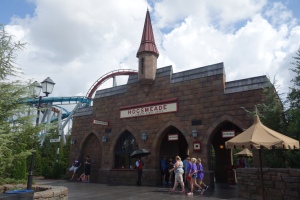 The station at Hogsmeade is more in keeping of a country station, but one detail I did notice was that as the station was modelled on Goathland Station on the North Yorkshire Moors Railway, where the movies were filmed, the water tower at the end of the station has been copied in the queue for the attraction.

2 thoughts on “The Hogwarts Express at Universal Studios Orlando”