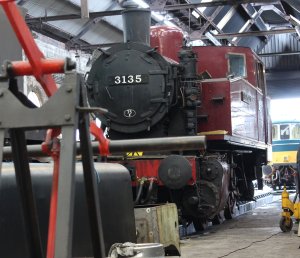 The Swindon and Cricklade Railway have launched an appeal to secure the future of Spartan.  Spartan is a Polish Tkh 0-6-0 tank engine built in 1953 by the Fablok Company in the town of Chzanov.  Remarkably, 3135 Spartan is the first steam locomotive owned by the preserved railway, despite it being established in 1978.  It moved to the line in December 2014 from the Spa Valley Railway and has since become popular with visitors.

You may wonder the significance of a locomotive being owned by a railway. It’s a part of the heritage railway industry that’s not often discussed.  Steam locomotives are often owned by individuals or societies who enter hire agreements with a railway.  The railway will then pay hire fees to the owner to run or even just locate on the line.  The owner will use these funds along with other donations to keep their locomotive in operation.  This is often a good thing and there are many locomotives in operation only because they have dedicated support.  However, from a railway’s point of view, a dependence on hire agreements alone complicates matters that would otherwise be much simpler if they were to own a locomotive.  Being an owner can bring with it stability for the railway, particularly when you consider that they could otherwise invest in the future of a locomotive that could move away at a later date.  It is therefore no surprise that the Swindon and Cricklade want to secure the future of their only steam locomotive.

The railway is looking to raise £60,000 of funds to complete the purchase of Spartan, help pay for it’s ongoing maintenance and to start saving for an overhaul that is due in three years time.  Any funds that you can donate to support the railway that is the only standard gauge preserved line in Wiltshire, will help them to complete this investment for the future.  Click here to read more and contribute.