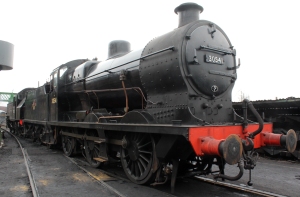 The Bluebell Railway’s Maunsell Q class made it’s first trip away from the Sussex railway since operating in preservation when it visited the Watercress Line’s Spring Steam Gala 2016.  I was lucky to have a closer look at this 0-6-0 in Ropley’s yard after the gala to have a closer look.

One of the most commonly known stories about this class was Bulleid’s reaction to them.  Chief Mechanical Engineer (CME) Maunsell, Bulleid’s predecessor’s last design was the Q class.  Its’ remit was simple – to replace other ageing 0-6-0 locomotives on mainly secondary routes and branch lines.  It is fair to say that as a type, the 0-6-0 had had its day in the UK and were making way from more modern designs, particularly from 4-6-0’s.  Bulleid was shocked that so much effort had been put into producing a new locomotive with such a dated specification.  Bulleid would have cancelled their construction if he had been appointed any sooner.

History now provides us with a hindsight that others may not have seen at the time – Bulleid was passionate in his belief that the steam locomotive could be modified and developed.  The Q class went against everything that Bulleid would stand for – the Q class was conventional, simple and based on long ago tried and tested principles.

Bulleid’s reaction to the Q class left a long lasting legacy that in reality is quite unfair.  The Q class was not a bad machine – it was a useful and reliable type that could be used on a wide a variety of routes.  It was fitted with steam heating equipment and vacuum brakes that meant it was capable of hauling passengers as well as freight. 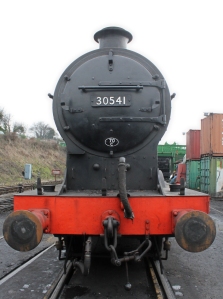 Only 20 Q class locomotives were built and only one of these survived through into preservation.  The class were used in Hampshire and 30541 looked perfectly at home working over the Alps.  The Bluebell Railway have long sung the praises of this simple, reliable efficient and attractive steam locomotive and it is easy to see why.

I am sure 30541 would be popular at other heritage railways and it will be interesting to see whether it goes on to travel elsewhere and let others decide for themselves whether building this locomotive was justifiable or not.  For the time being however, you’ll have to make your way to the Bluebell Railway, which sounds like a good excuse to me!

The pictures below show 30541 in action at the Mid Hants Railway’s Spring Steam Gala 2016.  Thanks for reading!