On the 1st October, the North Norfolk Railway held the annual Midland & Great Northern Joint Railway Society Members Day. All of the society’s locomotives were operational, B12 8572, Y14 564, Wissington, and Class 31, D5631, alongside class 37 D6732. Each of the locomotives, apart from the 37 were available at different times of the day to take part in a Driver for a Fiver, which was very popular. Members of the society were allowed free travel on all of the trains, and the general public were offered an enhanced service for a standard rate. With the amount of locomotives and unique rolling stock, it felt like a special event, but at a standard rate.

The society’s rolling stock was also in operation, with the unique Quad Art set, the almost complete Suburban four set, running with the three completed coaches, and the vintage train. The always reliable Mark 1s were also used, with the Gresley buffet as well, which will eventually form part of the mainline set.

As I mentioned in my previous blog post, Sheringham Station now has a footbridge, which offers new photo opportunities during gala weekends. It can be seen in the photo above, at the other end of the platform. Blue sheeting is currently adorning the edges of the bridge, but a permanent, and less visible fix will be coming in the next few weeks.

The Societies’ stalwart B12, back in operation at the end of June, and working perfectly. As I mentioned in the previous blog post, she will be the guest of honour at the Bluebell Railway’s Giants of Steam Gala, and hopefully make the NNR and M&GN Society proud flying the flag for East Anglian heritage.

Above is the turntable that was purchased from the South Devon Railway, which will eventually be used at Holt. This is to change the eastern side of Holt Station, currently where the Miniature Railway is. However, not only will guests be able to see locomotives being turned at events, but will be useful when rail tours come from the mainline, and the locomotive can be turned. This is a long term project however, and will need additional funding, but this is a start to an exciting endeavour.

While the B12 was at Holt station, I thought I would take a photo of the internal mechanism. The craftsmanship of the steam age is still alive – this was restored only a few years ago.

Wissington made its first appearance since returning from her summer at the Mid Suffolk Light Railway, affectionately known as the Middy. Since the installation of a Brick Arch in the firebox, there have been no problems with the locomotive. The spark arrestor, which is at the top of the chimney last year, gives this distinctive locomotive even more charm. 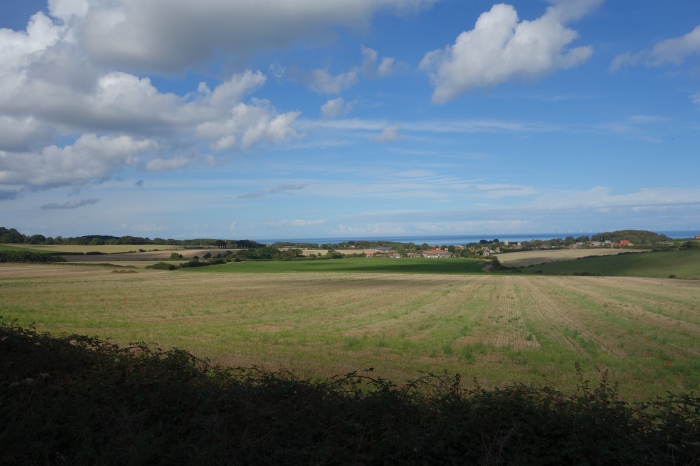 A view I always like when visiting the railway, and the first glimpse of the sea from Holt, which a Victorian traveller would have experienced over 150 years ago. This view, much unchanged, is still able to be seen. I was on the Wisbech and Upwell Tramcar, on the back platform, which allowed some spectacular views. 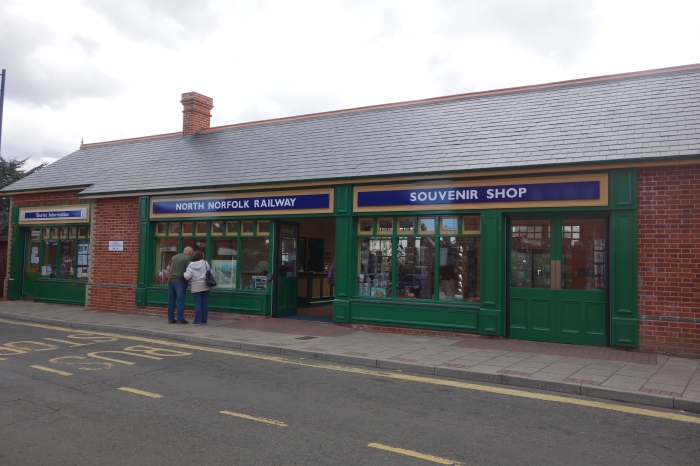 The new shop and tourist information was opened over the summer, and complements the original station. Having an expanded shop has enabled at larger cafe, which is always popular every day the trains are running. The tourist information centre, which is now operated by the NNR has shown the good connection the railway has to the local council, and has expanded the station site. Although, the station buildings on platform 2 are next to be rebuilt, having a good relationship with the council will make the process much quicker.

As it can be seen, the use of a similar style brick, the difference between the new block and the original station cannot be seen easily.

While I was at Weybourne, I went on one of the shed tours which would look behind the scenes of the railway. On offer was a guided tour of the locomotive works and the carriage and wagon works. It is always fascinating to see the locomotives and rolling stock at various stages of restorations. 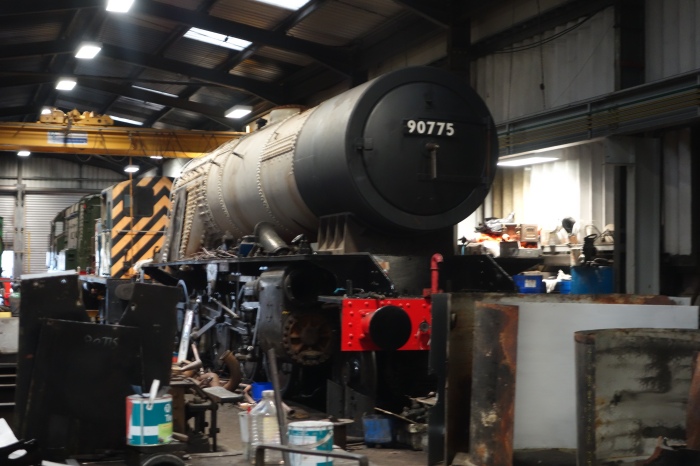 M&GN Society Chairman, Neil Sharpe, said “Trustees and members are really pleased with the progress being made. The “Iron horse” really is back in the saddle.” The Society awarded the contract for the locomotive’s overhaul to the recently established engineering division of the North Norfolk Railway which has received considerable investment from the Railway in new facilities and expertise to enable the complete overhaul of locomotives without the need to send them away. It can also undertake work for other heritage lines and locomotive owners. The work on the WD included the complete refurbishment of the horn guides, axle boxes and wheel sets. Optical alignment equipment was used to ensure the accuracy of these components and complex plate renewals were done in the new boiler shop. Following the successful steam test earlier in the month, the boiler was reunited with the loco chassis in late September. This is a major step in the completion of the overhaul.

Class 03 D2063 still undergoing repairs by a single volunteer, but hopefully it will be back in service in the near future.

Still in the shed was 7F 53809, which had visited the railway for the Autumn Steam Gala and the 1940s weekend. After it suffered a fault on the Sunday of the latter event, she has now left the railway, venturing to the Mid Hants Railway for the half -term week.Also in the shed was Hunslet Ring Haw, and the 08 shunter, undergoing overhaul. Ring Haw disgraced herself with leaky tubes at the steam gala, and is waiting to undergo repairs. Next to it is Class 08 D3935, which is undergoing a major overhaul, but hopefully will be finished in the near future.

9F 92203 Black Prince was outside the yard. It has been a year since the North Norfolk Railway PLC bought the locomotive from wildlife artist David Shepherd, who still visits the railway, and is given the chance to operate what we still consider to be his locomotive. 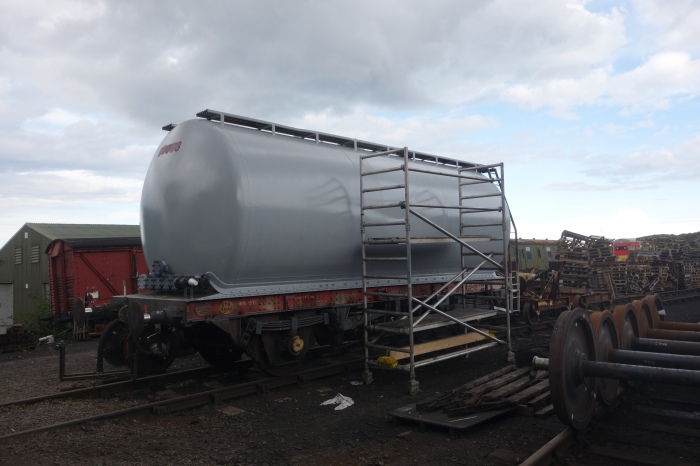 Also outside was Metropolitan Cammell 1965 4 Wheel Petroleum Tank 53083, which has been undergoing a repaint in the last few weeks, which has been the subject of the Carriage & Wagon News Blog recently. If you want to keep up to date with all of the latest news surrounding the NNR rolling stock, and updates to the Suburban 4 project and Vintage train. http://nnrailway.blogspot.co.uk/

Above is British Railways 1957 Mark 1 Tourist Second Open E4641, which is undergoing a major overhaul. This weekend was very significant for the railway as well, as the NNR was hosting the annual Carriage Convention, the second time the railway has hosted. They were able to view the current restoration projects, and view the inside of Bridge Road Carriage Shed, where restored and unrestored rolling stock are stored. 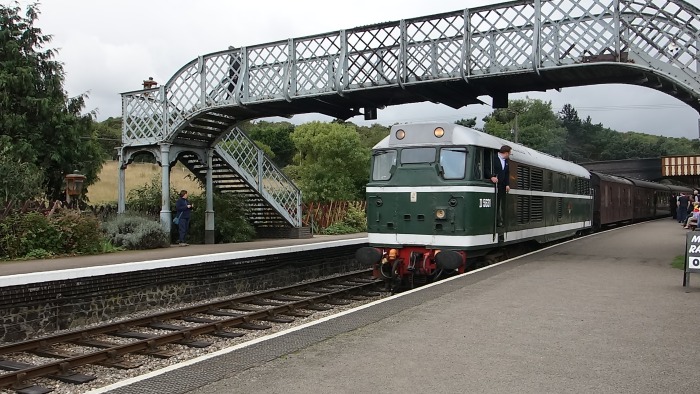 My final shot was of Class 31 D5631, which is the society’s stalwart diesel locomotive. After I boarded this train, it began to rain heavily, and I decided to leave. To everyone involved for the day’s event, from the locomotive staff to the people who manned the guided tours, it was excellent, and I look forward to next year’s event.