Seeing as the reason for the May bank holiday weekend trip to the Watercress Line was to see and ride on heritage DMU Thumper 1125 in action (click here to read more), it seemed fitting when at Ropley to look at another heritage diesel locomotive a little closer than usual!  08032 is one of a common yet much loved class of diesel shunter. 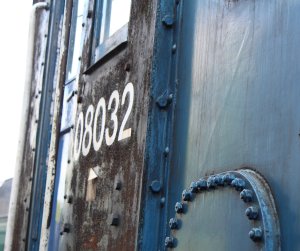 This is a humble member of the British Railway’s (BR) class 08, also known by their nickname “Gronks”.  The class is the most numerous type of locomotive ever built in the UK, almost hitting a thousand with 996 built.  They were based on the LMS class 12033, hence their antiquated looks.

08032 was one of the Derby built machines and was completed in 1954.  Originally numbered 13044 it was based at Norwood Junction at first, but moved to various locations in its career with BR. In 1958 if was renumbered D3044 and became 08032 in 1974 under the BR TOPS numbering scheme.  Soon after it was withdrawn by BR and purchased by Foster Yeoman for use at Merehead quarry.  It is a fairly new member of the Watercress Line, moving to the heritage line in 2009.

It estimated that around 100 class 08 diesel shunters can still be found on the main British network and another 60 on preserved lines around the country.  The class is a truly successful type that has a career spanning well over 60 years and counting.  Despite this (or maybe because of this) its’ steam age looks makes it popular, being a type many love or love to hate (the villain Devious Diesel from Thomas the Tank Engine and friends is after all a class 08!)

I hope you like this look at a classic diesel shunter!  Thanks for reading 🙂 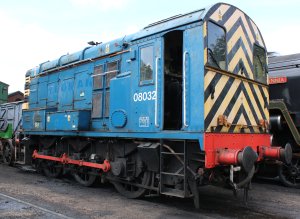 Click here to read more articles from this visit to the Watercress Line.