Today was the last Dorset Coast Express service of the season, the weekly express which runs from London Victoria to Weymouth is a favorite of mine and allows me to see some great mainline steam before working on 35005 Canadian Pacific inside Eastleigh works. The last service was hauled by unrebuilt Battle of Britain class 34067 Tangmere seen here leaving Eastleigh. I was surprised the loco was on the express after this weeks runs hauling the Royal Dutchy and the 2 main legs of the Atlantic Coast Express.

This year has seen 3 different locos haul the express  with Black 5 44932 (I managed to catch her on the first run of the season) hauling the first three services of the year and then 70013 Oliver Cromwell (I caught her on the 6th August) hauling the next two with Tangmere on the last couple.

Tangmere sounded very impressive with her 3 cylinder sound track on this part of the run. It was the first time I have seen the loco since her incident last year and I was very glad to see her back in action as she was such a reliable performer before. 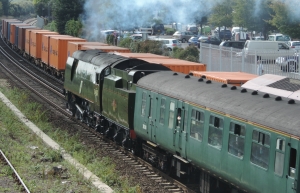 Several tours were cancelled this year due to the firefighters strike and I do hope they run again next year as I have enjoyed seeing them over the last few years.